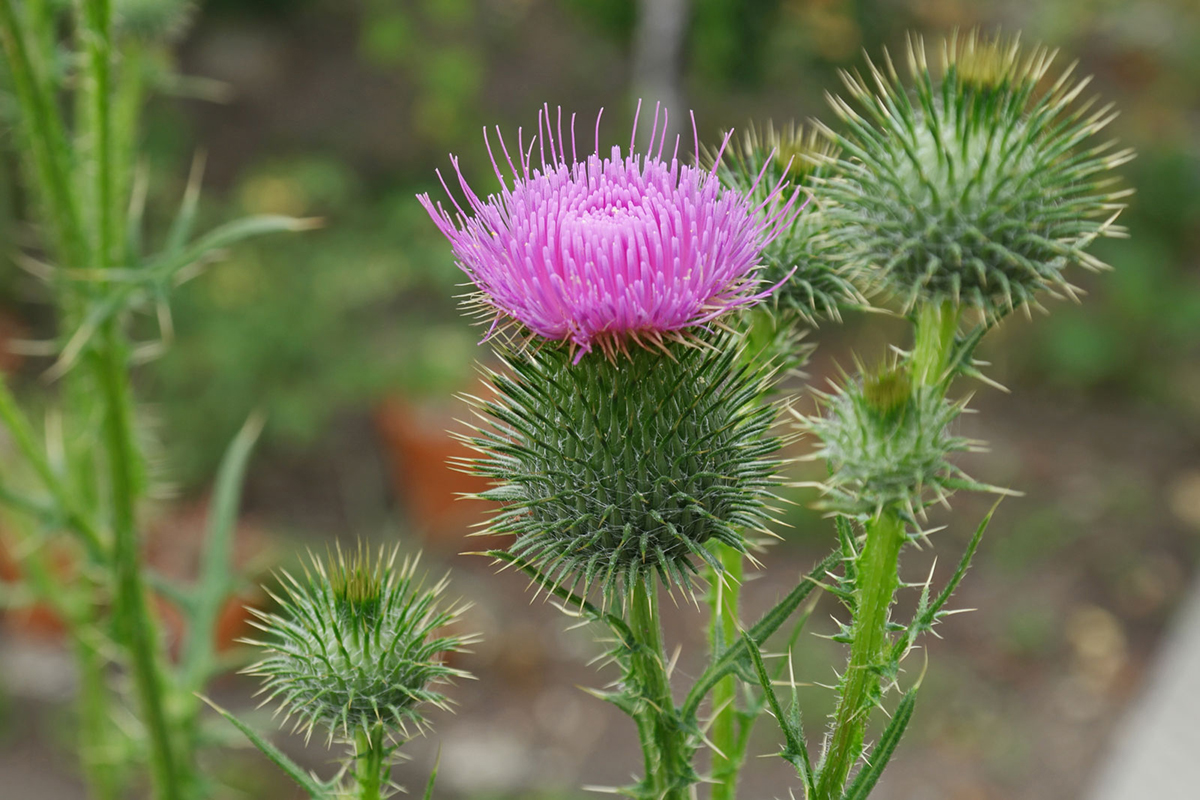 Thistles are one of those plants you will always recognize once you’ve met it. Anyone who has ever accidentally run into one while wandering around outside will know to avoid getting pinched by it in the future. Many people look at it as a weed, but there are a lot of things going for the thistle. Some are even used by gardeners.

Thistles are recognizable by their prickly leaves and stems, though they actually come from a number of different genera, including Carduus, Centaurea, Cirsium, Cnicus, Echinops, Onopordum, and Silybum. The one most of us probably find growing between cracks in the concrete, as well as anyplace else they can get a foot hold, is Onopordum acanthium or Cotton Thistle. Here in the Unites States, it is considered an invasive weed species. Easily confused with Cotton Thistle is perhaps the most iconic of all the plants of this group – Cirsium vulgare, the Scotch Thistle. Yes friends, believe it or not, this prickly specimen is a national emblem of Scotland. According to lore, it saved the Scots from a Norse invasion back in the 1200’s when the invaders, trying to sneak up on the Scots early one morning, stepped on thistle and lost the element of surprise.

Thistles for the garden

For all their sharp character, there are several thistles that have been used in the garden, especially recently. If your goal is to find texture and color to keep your garden look interesting into the fall, thistles can be a great way to achieve that. Or, if you’re looking for more medicinal effects, Milk Thistle has been a traditional herb for centuries.
Native Thistles: Below is a list of thistles commonly available in the US through garden centers, but I’d like to make a plug for planting natives. Even though the common garden varieties are known as good pollinator plants, the native species will always be better for the local ecosystem. Especially if you are planting a naturalized area, the species native to your area would be a great choice. The more we can bring natives into our designs, the better.

This is the work horse of the garden thistles, and a couple of the plants discussed below are selections of this species. Like those selections, E. ritro has a long bloom time from early summer all the way to the beginning of fall. The color is a lovely blue, and the texture works well with many of the more common garden plants, especially ones without a strong texture of their own. It grows to roughly 4′ tall and can handle poor soil. It’s also considered a strong pollinator plant, though it’s always best to include natives in the garden for that purpose.

Blue Glow has a lot going for it, especially the vibrant blue of its flower.

Veitch’s Blue tends to be just a bit smaller than the species at roughly 3′ tall, give or take, and it is a more abundant producer of flowers with a darker blue color.

The Sea Holly has the advantage of being smaller than many of its thistle brethren, with most varieties clocking in at about 1′ tall or less. They have many of the same characteristics, including round blue flowers, interesting texture, and the ability to thrive in poor soil. Because they are so small, they tend to lack a bit of the dramatic flair of the Globe Thistles.

I think it’s safe to say most people who grow Milk Thistle want it as a medicinal herb. It can be invasive, and it’s natural habit is biennial. If you want to grow it as an annual, you can start it from seed in early spring, but you’ll want to cut the flowers off before they set seed. The plant can actually be poisonous to cattle. I include it in my herb garden, but it’s at the back of the bed due to its size.

This video is for anyone who needs a quick nature fix. Sixty seconds of creekside contemplation.